Are you qualified for Bariatric surgery?

The prevalence of obesity among children and adolescents is rapidly increasing and is associated with substantial co-morbid disease states. At present, a mounting body of evidence supports the use of modern surgical weight loss procedures for carefully selected, extremely obese adolescents. Scientiﬁc evidence demonstrating the high propensity of severely obese adolescents to become severely obese adults and the greater associated risk among adults with “juvenile-onset” obesity (i.e., obese adults who became obese during childhood; approximately 25%) combined with the evidence demonstrating improvement in obesity-related co-morbid diseases after weight loss induced by bariatric surgery support the concept of “early” intervention in carefully selected adolescents patients. Although current evidence is not sufﬁciently robust to allow a precise recommendations among speciﬁc bariatric procedures, an increasing body of data demonstrating evidence of safety and efﬁcacy exists for 2 of the more commonly performed bariatric procedures for this age group (i.e., Roux-en-Y gastric bypass [RYGB] and adjustable gastric band. 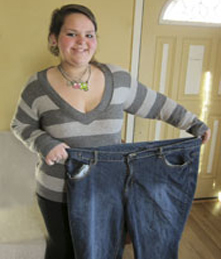 Type 2 diabetes mellitus
A steep increase in the prevalence of type 2 diabetes is occurring worldwide, in parallel with the increasing rate of obesity in children and adolescents. Type 2 diabetes is widely considered a chronic, progressive disease, and, among children and adolescents, it is associated with an increased risk of hypertension, dyslipidemia, and non alcoholic fatty liver disease. In contrast to the signiﬁcant challenges encountered in achieving adequate glycemic control with medical and behavioral approaches in this age group, recent data suggest that diabetes can go into complete remission in adolescents who undergo RYGB. Thus, established type 2 diabetes a strong indication for bariatric surgery in morbidly obese adolescents.

nonalcoholic steatohepatitis
Approximately 38% of obese children and adolescents have steatosis compared with 5% of lean subjects, and about 9% have nonalcoholic steatohepatitis (NASH) compared with 1% of the lean population. Although the risk factors for the progression of steatosis and NASH to frank cirrhosis are not fully understood, recent data have demonstrated a decrease in the degree of steatosis and inﬂammatory markers in most patients and regression in hepatic ﬁbrosis after bariatric surgery in some patients. Therefore, NASH should be considered as a strong indication for early bariatric surgery in adolescent patient compared with steatosis alone.

Bariatric surgery can result in improvement of the metabolic and inﬂammatory parameters of the metabolic syndrome, including hyperinsulinemia, insulin resistance, and abnormal lipid metabolism.